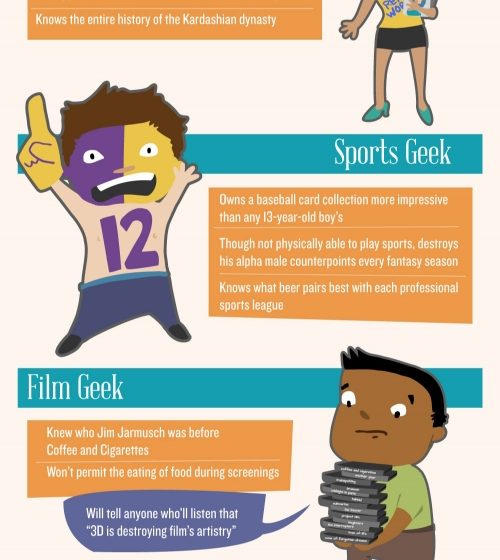 The Battle of the Geeks is upon us! Who’ll take home the title? The obvious contender is the Ubergeek – you know the one. He’s the guy with taped-up glasses, coding in one of his 5 computer languages on one of his multiple Linux builds.

But wait – don’t discount the other geeks! What about the Star Wars geek, who’s worn out his VHS copy of Return of the Jedi from too much rewinding? Or his archenemy, the Trekkie geek. Don’t you dare suggest that he watch Avatar – he’s only in to “hard” science fiction.

Of course, if you really want to dive deep into geekdom, you’ll need to look beyond the obvious. What about the pop culture geek, who’s been keeping up with the Kardashians before they even got on TV? Or the craft geek who knows the secret art of hot gluing something without burning all your fingers off?

So who are you rooting for in the Battle of the Geeks? Look below to see who you’ll be backing in this Battle Royale (that’s a film geek reference, for those not in the know).

One thought on “Who’s the Geekiest?”