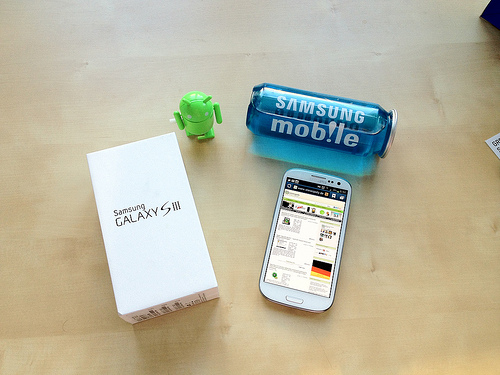 Who Takes the Crown?

It appears that the iPhone’s reign over smartphones has finally come to an end when it is faced against Samsung’s Galaxy S3. One of the core examples of how Samsung’s new smartphone is superior is its facial recognition; mainly because the iPhone simply isn’t equipped with it. This amazing feature gives you the ability to unlock your phone with a glance, keep the screen active while looking at it, and having it dim if you look away from it.

While talking about the screen it’s only fair to mention that calling is much easier also; for example: if you want to call a contact you have selected you just need to put the phone to your ear and the call is underway. To take a screenshot just swipe your palm right to left, it’s that simple.

The Galaxy S3 is also much more physically sleek than the iPhone counterpart. It is both thinner and lighter while sporting a vastly larger screen size 4.8″ to the iPhone’s 3.5″ or 720 x 1280 pixels vs 640 x 960 pixels making the iPhone just seem clunky and obsolete when the two are compared against one another; it’s like trying to compare the best tube television against any HDTV, sure they’re similar, but there’s really no competition.

The ease of use and amazing features on the S3 are so jaw dropping you wouldn’t want anything that doesn’t have them. It is equipped with an HDMI port so video and movies can be watched on an HDTV with HDMI input which is incredibly awesome in and of itself but ever better because it has extremely fast downloads, especially in contrast to the iPhone. It can do 21.0MB/s against 14.4MB/s which means 46% faster downloads; giving you the ability to stream anything you’d like on the phone or onto that HDTV effortlessly; which includes flash support.

It’s able to be charged with any standard USB cable which means fast, cheap, and easy replacements if anything happens to it and if you don’t want to be bothered with cords at all, you can just charge it wirelessly. Not that charging is going to be a big deal with the Samsung Galaxy S3 with it’s vastly superior 49% more battery power. If you need any help getting around town no problem because it also has a free navigation system included with it.

Regardless of all the amazing bells and whistles, the Samsung Galaxy S3 is just physically a better crafted smartphone. It has a MicroSD slot which is going to enable you to increase the storage capacity. Double the random access memory (RAM) at 1GB boosting performance for all the apps you want to use. The S3 is also endowed with crazy fast processing speeds at 3.5x that of the iPhone.

The S3 also has 5.3x more megapixel on the front camera. Speaking of the camera, if you want to transfer a photo (or file for that matter) all you need to do is tap the two phones and then choose what to send over. In the end, the comparison is really no comparison when it comes to the Samsung Galaxy S3 against the iPhone 4S.

Ran Gibson is a professional writer on tech topics galore. He likes to write about smartphones, iPhone jailbreaking, apps and other cool tech stuff. Check out more work on his site?and other iPhone related topics.

3 thoughts on “Samsung Galaxy S3 vs the iPhone – who wins?”

http://www.365admin.com.au/2017/05/how-to-configure-your-desktop-pc-for.html?m=1 Need to setup your PC to manage o365 via powershell? Finding, downloading, and installing all the needed powershell models...

https://wp.me/pVf12-Gb To change the o365 portal per user in a hybrid setup. You need to set an attribute for the...

A relaxing on our summer camping trip. Testing a post without an image. our house sitter called and wifi isn't...

Happy Thanksgiving everyone, please take a minute today to thinking about all the wonderful people in your lives. I ask...

We are switching webhost again. Please excuse the mess and any errors. I hope to have everything full functional by...