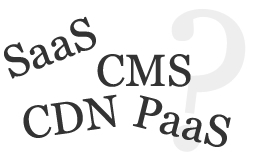 The recent explosion of cloud computing has led to a number of cloud-based acronyms that help differentiate between the different products and services available. When a piece of technology becomes immensely popular, there are always those who hope to connect their product to the technology in order to drive sales, regardless of whether or not the product is truly aligned with the new technology. Understanding the popular acronyms behind cloud computing is imperative if you want to be able to tell true cloud services, like those we offer here at Rackspace, from legacy services hoping to cash in on the term ?cloud.?

The three main acronyms in cloud computing are SaaS, PaaS and IaaS?which stand, respectively, for Software as a Service, Platform as a Service and Infrastructure as a Service. These three areas make up the majority of cloud offerings and are often described as a stack, due to their relation with each other, with SaaS at the pinnacle and IaaS at the base. There is another cloud acronym that is gaining traction, CDN (content delivery networks), as fast content delivery becomes a requirement for any Internet-based business.

SaaS was one of the first elements of cloud computing to come into existence. The term refers to software that is distributed over the Internet, as opposed to distribution by traditional media. To be considered a true SaaS offering, the software must be available on-demand without the need for an intermediary and from more than one physical machine, support a multi-tenant architecture where a single application configuration can serve multiple customers, seamlessly scale up to meet increasing demand, and have a cost that scales with use. SaaS first gained popularity as a Customer Relationship Management (CRM) offering, but has now grown to include almost all types of software. Since software is at the heart of all technology, SaaS probably makes up most of today?s cloud computing, and will probably continue to do so for the foreseeable future.

PaaS sits between SaaS and IaaS, and is perhaps the least understood of the three major components of cloud computing. PaaS offerings provide a complete solution stack so that software developers can develop and distribute an application entirely from the cloud. PaaS solutions include a development environment where multiple developers can manage and update the application, a set of common tools used to build the application, and a distribution channel for releasing the final product. PaaS solutions are generally considered superior to traditional development solutions, as the entire process is hosted in the cloud, and thus able to benefit from traditional cloud advantages like resource scalability and flexible billing.

IaaS takes the benefits of cloud computing and applies them to hardware. In a traditional data center, you have exactly as much computing power as you have appliances and are often either wasting resources or wishing you had more. An IaaS solution uses the cloud provider?s hardware, allowing the consumed resources to scale up or down as traffic does. This enables businesses with fairly volatile traffic patterns to be able to serve their customers while keeping costs to a minimum. True IaaS solutions exist in the public cloud because only those major data centers can have close to unlimited scalability; but due to data security issues, many cloud providers now offer an IaaS solution within a private network, or comprise part of a private network. While these solutions often operate in a similar manner to the public cloud, whether or not they are a part of cloud computing is a current point of contention for some in the industry.

Content delivery networks have been around for a while, and attempt to improve the speed in which content is deployed. CDNs are technically a set of interconnected computers in physically different locations, usually across the country or around the world, that enable users to download information much quicker than if they were just downloading from a central data center. Many cloud providers are offering a CDN solution, like here at Rackspace with Akamai CDN, turning CDN from a service once only available to the largest companies to one available to almost anyone.

One thought on “Common Cloud Acronyms: Clearing Up Confusion”