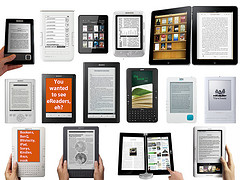 There are so many different handheld, electronic devices on the market. There are tablets and smartphones and iPods. There are also eReaders. If you enjoy reading very often, you could benefit from owning an eReader. EReaders offer a lot of benefits. They allow you to access an unlimited number of books, magazines or newspaper, and you can bring all of them with you in one tiny package. EReaders have a lot of great features that make reading easy, such as the ability to quickly search through text. If you?re considering buying one, there are currently quite a few different options on the market. But which eReader should you buy? That will depend on your personal preferences and which features are most important to you. Here is a quick guide to help you decide on an eReader.

The Kindle is the original eReader. If you want the most basic eReader available, this is the one for you. This device, brought to you by Amazon, has a six-inch screen and weighs less than nine ounces. It has uses a grayscale e-ink screen. E-ink was designed so that it looks as similar to a real piece of paper as possible. There is no backlighting, so you won?t experience eyestrain, and you can read in bright lights without glare. You can?t read in the dark, though, without extra lighting. You have access to almost two millions books in the Amazon library, and the battery lasts for more than 30 hours or more on a single charge. It also gets Wi-Fi Internet access, and it does not have a touch screen but a built-in keyboard. It costs around $100, so it?s very affordable.

If you want an eReader that does more, the NookColor might be for you. It uses a color LCD screen, so you aren?t limited to reading just black and white. This is great if you read a lot of magazine subscriptions or children?s books with your kids. It can, however, result in more eyestrain when reading for long periods of time, and there will be a lot of glare on the screen in direct sunlight. It has a seven-inch screen and weighs just less than one pound. It is one of the heavier eReaders, which does make a difference when you?re holding it for long periods of time. It has Wi-Fi connectivity, a touch screen, and the battery lasts for about eight hours on a single charge. There are almost three million books in the Barnes & Noble library. It costs around $200.

The Sony Reader Touch Edition is another eReader option, but it?s not quite as popular or the Kindle or Nook lines. There are only about 20,000 books in the Sony library, so your selection will be much less broad. It is an e-ink reader with a six-inch screen and weighing less than eight ounces. It has Wi-Fi connectivity. The battery life on this eReader is much higher; it will easily last for more than 100 hours. It costs around $150.

5 thoughts on “Which eReader Should You Buy?”

The Battle of the Geeks is upon us! Who'll take home the title? The obvious contender is the Ubergeek -...